The parking meter at the top of Wellwood Street, just off Great Victoria Street, had been adorned with a small rectangular sticker. In black writing on a silver background, it stated: You are beautiful. It was positioned at just the right place to be easily seen, on the black background just below the instructions. I always felt grateful for this little nugget of positivity on my way to sign on the dole at Conor House around the corner; being told you’re beautiful, even if it’s in a non-personal way, is a great thing. In fact, the generality of the message, the way it was intended for everyone, was beautiful in itself. 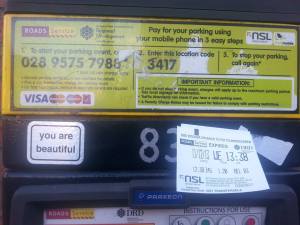 The sticker’s placement and continued survival (often accompanied by parking tickets with time left on them) filled me with pride for the people of Belfast; it was an example of the generosity of spirit and optimism that was all too often lacking in a society racked by austerity, sectarianism, intolerance, and political intransigence. I don’t know who finally decided that we weren’t beautiful, or that we shouldn’t be told that we were, but the sticker was eventually removed. Against the odds it had survived for nearly a year, despite the fact that it could easily have been removed by hand: it was too good for this life. Cunt, on the opposite wall, is still there. 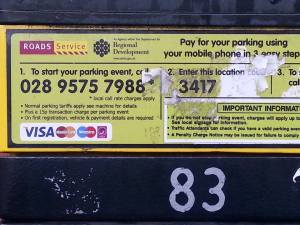