Nobody knew where it came from, or how it spread so far, so quickly. It appeared on three continents in the course of one day; a mark on the calendar that became portentously known as Day 1. It was soon apparent that the outbreak was worse than anything that had ever been seen before. It was apocalyptic, almost as if a bamboo-style mass die-off of the human species had been triggered. In no time, the horrendous West African Ebola epidemic of 2013-16, which had claimed the lives of over 11,300 people, began to look parochial in comparison. Reactions to the threat were entirely predictable: everyone blamed each other, the usual suspects were scapegoated, and God was enlisted on the side of the righteous. The virus, memorably named HKN1H7A, did not discriminate, however. It was given its nickname, Hyena, by a bright spark at the New York Times the minute its grisly symptoms became known. The name was entirely fitting: the illness announced its presence with bouts of uncontrollable laughter, accompanied by tears, coughing , and sneezing. After several hours red measle-like spots appeared on the chest, followed within about twenty four hours by a ghastly, wheezing, frothing death as the patient’s lungs filled with fluid.

You can imagine the impact when the first pictures were broadcast: a middle-aged man in striped pyjamas bubbling up his last moments in a Sydney hospital isolation tent; a taxi driver in Mexico City, who’d slept in his cab, rolling in the street with yellow spume encrusting his cheeks; a Turkish swimmer emerging from the sea, her upper torso peppered with livid crimson dots. Governments across the globe were caught on the hop by the sudden and widespread nature of the outbreak. Virologists and tropical disease specialists appeared on TV screens theorising about incubation periods and how the disease was transmitted, but really at this early stage they knew very little about it, apart from the fact that it was spreading very fast, and leaving a lot of bodies in its wake. The virus was, of course, reported in the news as originating in tropical Africa; the journalists knew the script. They’d all seen Outbreak. They were wrong.

World leaders promised their panicking populations that they were doing everything possible to contain the virus or prevent it entering their country. Borders were shut and travel restricted. But it was already too late: by the end of Week 2, the village of Buldug in Azerbaijan (population 1,797) was officially recorded as the first community to have laughed themselves out of existence. Other grim statistics were to follow in quick succession. In many countries laughter was prohibited in order to protect cheerful healthy citizens from being banished, locked up in isolation cells, or attacked and killed by rampaging vigilante mobs. A pseudo-scientific fake news theory that the virus attacked ‘funny people’ spread like wildfire on social media. Thick black smoke rose above burnt-out comedy clubs and joke shops, and cinemas no longer showed anything remotely humorous; even Hugh Grant romcoms were shelved. A Scottish stand-up comedian sourly announcing the end of his career remarked, “They always said laughter was infectious; well, now it’s true, only in a bad way. It used to be the comics that died on stage, but now it’s the audience killing themselves laughing. It’s beyond a joke”. Laughter disappeared from streets, bars, and other public places. Having a sense of humour became an undesirable character trait. The acronym GSOH vanished from dating websites and personal ads, to be replaced with NSOH and DOUR. Demand for certain illegal drugs slackened, while ‘downers’ became the order of the day. Psilocybin mushrooms went unpicked.

In Northern Ireland the border was quickly sealed by the army and navy. Republicans called for an island-wide response to the new security arrangements, but were secretly glad of the extra layer of security and didn’t push their argument too hard. At first, loyalists were  unsmilingly jubilant at the closure of the border, but it wasn’t long before boredom and a sense of purposelessness set in, and rallies were held outside Belfast City Hall against their new isolation from the rest of Britain. Addressing the crowd, a senior Orangeman stated that the travel ban was a flagrant attack on their traditions, and they would march wherever they wanted. Later that week, a suspected case of Hyena from Cobh was hospitalised in Cork city, sending anxiety levels and paranoia soaring over the whole island. The first minister took to the airwaves from Stormont to declare a national emergency, weakly hinting that the virus was the work of republicans and stating through pursed lips that laughter was “no longer the best medicine”; the good old days of the chuckle brothers were emphatically over. Vigilance was urged, and a new campaign to Keep Ulster Sombre was launched. Kitchener-style posters appeared encouraging people to tout on their friends, neighbours, and relations if any frivolity was suspected. Flimsy pretexts were entirely acceptable, and vendettas, petty feuds and sibling rivalries now had a new means of settlement. Pyjama-clad grandparents and solitary professionals were dragged from their houses in the early hours by the newly-formed Police Isolation Group. The theme music to Only Fools and Horses or a suppressed guffaw being heard through the walls was enough for the PIGs to kick in the door. Quarantine camps were hastily set up on disused airfields, and Long Kesh was re-populated. Diageo issued a profit warning while Dale Farm increased buttermilk production by 23%. A new book, Solemn Tales for Presbyterians, became an instant best seller as the War on Laughter escalated.

Up on the hill, the Stormont assembly was recalled for an emergency session to define exactly what constituted laughter. Smiling was to be discouraged but acceptable, up to the point where visible bodily shaking (the ‘laughter movement’), occurred. Children under the age of five were exempt from automatic isolation, but parents were instructed not to behave in such a way as to encourage any sort of hilarity. Tickling was strictly prohibited, as were tall tales, silly voices and walks, jokes and impersonations. Pyres were made to publicly dispose of anything that might be considered humorous, and citizens were encouraged to purge their shelves of all such material at public bonfires. There was, of course, debate as to what constituted humorous material and what did not; Steve Martin, Jim Davidson, and Mrs Brown’s Boys were included on the incineration list just to be on the safe side. Strict penalties for owning ‘media liable to incite laughter’ were introduced. Websites were closed down and internet service providers forced to censor content. LAD made one last defiant post, rejuvenating the famous ‘No Surrender’ city hall fleg protester video before they were forced off the web under threat of incarceration for incitement. Attempts to post satirical yet un-funny material were unsuccessful.

Predictably, the suicide rate increased, quadrupling in the dark winter months, and GP referrals for depression went through the roof. Marriage break-ups increased by 40%. By the end of Month 4 of the Hyena outbreak around half the population was on some form of therapy, and production of anti-depressants was tripled by the pharmaceutical companies. There was, however, an upside to this bleak statistic: half the population didn’t even need to reach for a copy of Solemn Tales to dampen their mirth, as they weren’t in danger of even cracking a smile. And there was more good news: Northern Ireland remained Hyena-free, even as the world’s continental land masses succumbed to unwanted hilarity, riots, lootings, and martial law. The security forces were by and large successful in their attempts to control people-smuggling due to the implementation of a shoot-to-kill policy, although some attempts to get relations and high-paying individuals in were successful. The population of Rathlin Island grew mysteriously by 30%, despite a naval blockade.

As would be expected, it didn’t take long for illicit activity to mushroom across Northern Ireland. A black market for funny movies and stand-up shows burgeoned. For those who had the funds and were willing to risk it, a bootleg Benny Hill DVD could be purchased for £75 on the Dark Web; the original Pink Panther movies could fetch up to £300 each. Isolated farmhouses and soundproofed city social clubs turned into comedy venues. The authorities were vigilant, however. In one shocking case, a raid on an East Belfast premises, using state-of-the-art listening equipment, uncovered a whole Father Ted box set, with one DVD still in the player. Thirty five people were taken away in vans by the PIGs. An elderly man had to be restrained after refusing to control himself; a UTV news anchor reporting the incident struggled to keep his face straight. Allegedly, as he was taken away, the man had repeatedly shouted “I don’t beleeeeeeeve it!”, “down with that sort of thing!”and “feck off!” with tears streaming down his face – until his rebellion was suppressed by the application of a baton to the solar plexus. In a later court case this was deemed to be a reasonable use of force given the level of incitement.

In another case a retired judge was taken away in cuffs from his Malone Road home after being found in possession of black-market VHS tapes of Porridge, Fawlty Towers, and Red Dwarf (series 1-6). He remained defiant even as they shipped him off to Long Kesh to begin his isolation, stating that he regretted nothing, and would do it all again if he had to. Reporting back after his release, he described his time inside as rather pleasant, once he’d got used to the conditions. Although strictly segregated, the inmates were able to share jokes and laugh as much as they wanted. The judge described the atmosphere as generally comradely and warm, although he admitted to hoping that the guy who did the Frank Carson impressions was genuinely infected, after ten days of “It’s a cracker!” every five minutes. Once news of the convivial atmosphere inside isolation got out, there were those, mostly habitually jolly people and compulsive joke tellers, who actively sought incarceration despite the risk of infection. As he was taken in for telling one-liners on a street corner, one wag commented: “Month inside for dealing craic, wha?! Better off taking your chances in here and having a bit of a laugh, than living in Miseryville over there”.

It took a year and ten months for a vaccine to be developed and distributed. In that time the global population had been decimated, and life everywhere had changed completely – apart from some as-yet-undiscovered corners of the Amazon rain forest. The demographic and social changes were enormous. As life returned to a new normality that once again accepted laughter – albeit grudgingly in some quarters – the debate in Northern Ireland turned to recalcitrant legacy issues: the repeal of the shoot-to-kill policy and emergency anti-humour legislation, the disbanding of the PIGs, and the re-opening of the border with the South. Everyone was back on familiar territory. 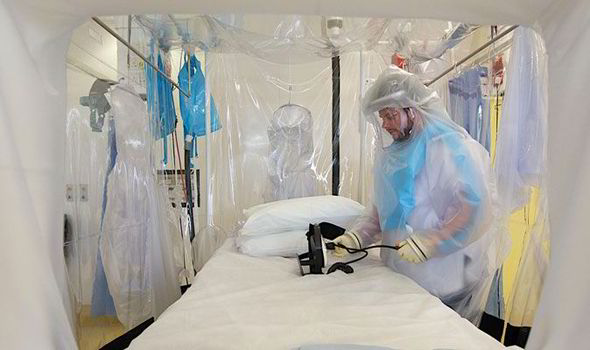 7 Responses to No Laughing Matter

A Journal and Teaching Tool Exposing Propaganda in the Mainstream Media